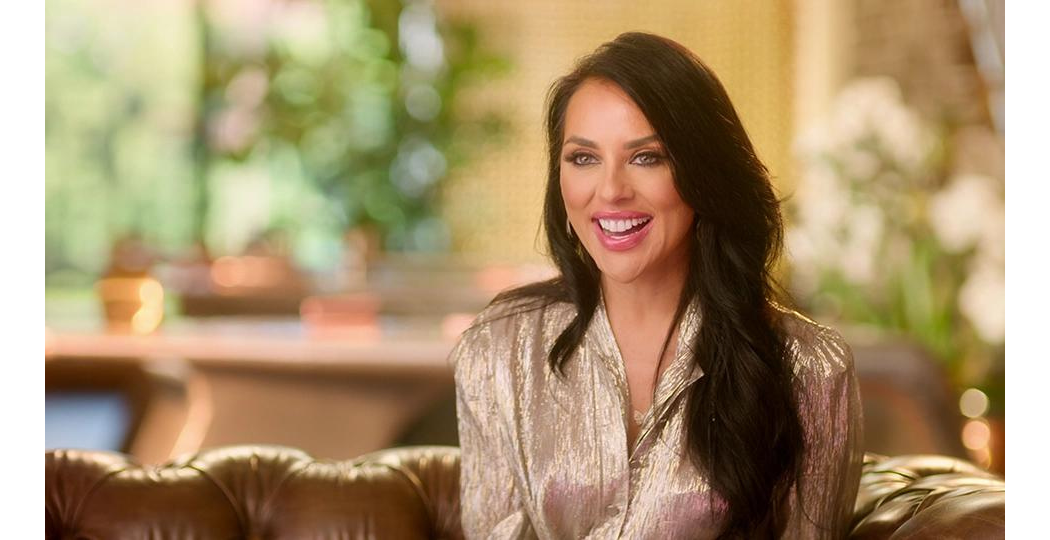 Amid a show where drama seems to be the going currency – as well as a spare $20 million – peace-loving Vanessa Villela is a breath of fresh air. Cheryl Caira chats the reality TV addiction of the year with Selling Sunset’s newest agent

“Is it real?” My opening gambit to one of Selling Sunset’s latest cast members is the question most asked by, well, everyone I’ve told about this interview. It’s also garnered the biggest shrieks of “WHAAAT?” for any interview I’ve done in my career – shrieks to rival the Selling Sunset girls themselves – because there’s no escaping how bingeworthy a hit this series has been.

According to Vanessa Villela, who hails from Mexico City and joined Sunset Strip brokerage The Oppenheim Group earlier in 2021, it’s all 100% legit. “As crazy as it all might seem,” she says with a cracker of a cackle, “It is real.” So there’s no guidance at all as to what the cast members should talk about? Good telly needs a gripping plot after all. Chrishell Stause, who’s been a realtor on the series since season one (and the focal point of much drama) had previously alluded to a bit of direction, saying: “They can sometimes nudge us to address things, but what we say is all us.”

“My experience on series four and five has been that there’s been no guidance,” says Villela. “Obviously they tell you today we’re going to film at the office or today we’re doing the baby shower. And then…” Suitably dramatic pause. “Things happen.”

Crafty editing has always been the name of the game with successful reality TV, and Selling Sunset does it as impeccably as the finishes on the multimillion-dollar mansions we get a sneak peek of throughout the programme. The show’s creator, Adam DiVello, producer of glamathon series The Hills, spotted Jason and Brett – the twins that own The Oppenheim Group – and their not unattractive female employees, and saw the makings of a real estate docusoap for the ages.

Anyway, here we are having just lapped up season four – with season five teased to drop in spring 2022 – and actually, such is our need for escapism at the moment in this tumultuous world, does it matter whether a conversation has happened organically or not?

What is authentic is that everyone that stars on the show is a licensed real estate agent (there have been accusations to the contrary, which The Oppenheim Group has strongly contested). Villela has a background in acting, where she found success starring in Mexican and Colombian telenovelas. A pivot to real estate does seem like a bit of a dramatic twist, although several of the other realtors on the show have also acted in the past. Are there any learnings from being in soap operas that have been advantageous crossing over to property?

“Well, I’m not afraid of the cameras. I’m also very in touch with my emotions, because I’ve been acting since I was little, so I think I’m able to read people well and know what they want or how they’re feeling. Obviously that’s so important in real estate, to connect with people.”

Villela’s journey into real estate is one rooted in love, but also tragedy. She was encouraged to pursue a different career by her sister Jackie, who was an estate agent in San Diego. Villela began studying for her real estate license, but in late 2018, Jackie unexpectedly passed away after having an adverse reaction to medication. It’s something Villela opens up about on her debut episode. As the other girls ask questions about her background, she reveals it was her sister that led her to the profession, and the raw pain is apparent.

Baring her grief on screen has brought comfort to others, she says, who have felt compelled to message her about sharing her story.

“It wasn’t something I planned. It was weird because I never thought I would open up so fast. It was just something that happened. Now more than ever, when so many people around the world are grieving, I do want to share more about that journey. I feel like it’s going to be very helpful for a lot of people to know how I’ve dealt with things.

“I’m not someone that’s going to hide that I’ve been in pain. I was doing a live show the other day, and I told them openly, ‘I had a terrible day yesterday.’ It’s not always rainbows and smiles in anyone’s life, although I am normally a very happy person.”

Has it been cathartic for her to talk about her pain as well as helping other people?

“Yes, 100%. And I’m trying to see the positive side of something so negative. Honouring my sister’s life by doing real estate has been the opportunity of my life. My sister knew real estate would be ideal for me because helping people makes me happy, and finding people their dream home or investment property is a way to do that. It’s been beautiful and I’m very lucky. I get emotional talking about it,” she says, choking up a little.

Villela admits she’s been overwhelmed recently with what sounds like a pretty nasty bout of long Covid, hitting her so hard that she had to miss a significant portion of filming for season five. She suffered with debilitating dizziness, brain fog, intense headaches and parosmia (when odours become distorted, with some people reporting food smelling or tasting like sewage).

“I’ve been an actor since I was four years old, and I’ve never skipped a day of filming in my entire life; until I got Covid. The first 10 days were really bad, then I would wake up feeling better, then an hour later it would be like: boom, it’s back. The first time I tried to go in and film for the show, I was there for two hours, and they had to put me in an Uber and send me home because I started to get dizzy while I was talking.

“It’s affected my body tremendously. My brain fog was so bad I was actually stuttering some of the time. But it won’t be forever. And I can’t stay in victim mode – I have to be positive. But some days I do break down and cry and I’m like, ‘Oh my God, I just want to feel normal again.” She credits meditation for helping her through some of her darkest times. “It’s changed my life. For the first three months after my sister passed away, I was super depressed. Then I thought, I can’t continue like this. I have to do something. When I was going through that nightmare, meditation helped bring some peace to my heart. The pain was still there, but it was more manageable.”

You’d be forgiven for thinking Selling Sunset was just a designer-bedecked spectacle of impossibly glamorous living. Season four has featured a heady mix of love triangles, former best friends, storm-outs, fallouts and the cliffhanger revelation of an undercover romance between an agent and a boss. But there is also some big-bucks selling – with eye-popping commissions to match – and getting to nose around houses the majority of us will never put a tootsie in is undeniably part of the show’s appeal.

Infinity pools, estates in the Hollywood Hills and movie-set views are par the course, with celebrity clients also coming with the territory. DJ Alesso, rapper French Montana, NBA player Thomas Bryant and actor Simu Liu have all featured on season four, with big gun A-listers like Meryl Streep, Orlando Bloom and Ellen DeGeneres also enlisting the services of the luxury-focused Oppenheim Group. And no, Davina still hasn’t sold the infamous $75 million house. If you know, you know.

There seems to be genuine affection towards Villela from the other ladies on the show. She’s come across as a diplomatic influence who has attempted to build bridges and dissipate some of the tension between cast members. Even Christine Quinn, the portrayed Cruella de Vil of the show (and we’re not just talking about her love of animal print) concedes: “I was going to be a bitch to you but now I feel horrible. You’re too nice”.

Villela is bubbling with energy and it’s endearing, both on the show and during our Zoom chat. She laughs a lot. Any vicious rumours about the cast upset her personally – such as the frankly nasty online speculation that because Quinn had returned to her pre-pregnancy shape so quickly, she had faked carrying the baby.

“I mean, it’s crazy. She obviously had the baby. I saw her when she was pregnant and right after. She has an amazing body – she’s been working out her whole life and she’s young. So she’s one of these lucky women that recovered her body super-fast. Rumours like that really bother me, because I know it hurt her to hear that.”

There’s no doubt Quinn is entertaining and pretty spellbinding to watch, with her technicoloured glamour, razor-sharp wit and zero fear of confrontation. Is she really just a bit of a pussycat underneath it all?

“She’s actually super-sweet with a heart of gold, but she comes across like someone way more aggressive. Everyone in life wants to feel loved, and she just wants her friends back. I think people can see more of Christine’s heart in season four than any other season.

“No one is reactive or has an attitude for no reason. You never know what they’ve gone through in their past or what they’re going through right now. It makes me happy that Christine was open to coming with me to see my mindset coach on the show, and that she’s still working with her now.”

Several of the cast have brought their collective fiancés and husbands in front of the cameras, or at least mentioned them. Villela has stayed relatively schtum up until now – but is she planning on following suit for season five?

“I’ve never really spoken about my love life before, but I’m madly in love, so I am open to sharing more of my life on screen. I don’t want to give everything away around my personal life because I know how it all works when you put so much out there, and I do want to protect my relationship. But my boyfriend [artist and photographer Tom Fraud] is the love of my life, so I’m not going to hide that either.”

There was much excitement during the series when Villela sold her first house, on the Pacific Coast Highway in her specialist area of beach city (and celebrity-filled) Malibu. It was a moment she had dreamed about, selling the lavish property for over the asking price and earning a cool commission exceeding $46,000.

“I’ve just set my manifestation goal for 2022, and it’s to list a house in Malibu above $20 million. And I want to sell Lady Gaga’s house, because I absolutely love her. I don’t even know if she wants to sell it – but I know she has a house in Malibu. Lady Gaga if you’re reading this, please – I want to be your listing agent.”

Manifesting is something Villela truly believes in. She was sitting on her sofa one evening, watching Selling Sunset, and while chatting to her best friend on the phone, said: “I just felt like I was on the show.” Two days later the producers contacted her, as she had apparently caught the attention of Jason and Brett Oppenheim.

“It was kind of magical. I felt like it was my sister saying, ‘You’re doing what you’re supposed to do.’ I feel that everything good that’s happened since she passed away, has been her guiding me. It’s been such an incredible journey and I’m so ready to take it to the next level.”