How would your perfect Fringe day begin?

Due to us finishing at around 1am every night (and coming down from the adrenaline of being back on stage) I usually sleep at about 4am. Unfortunately that means my mornings are spent snoring ­– I’m fully nocturnal. I tend to wake up around 1pm, grab a coffee and stare wistfully out of the window before launching myself down Leith Walk. Therefore my perfect fringe day would start early… I miss so much morning theatre! 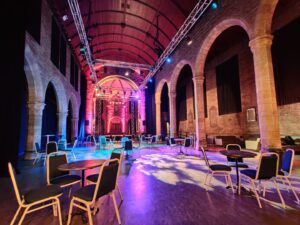 What are your favourite venues around the city?

I think theSpaceUK‘s venues are really quirky and cool. It feels like they take huge period rooms and transform them into black box theatres. Assembly Roxy is also really interesting – an old church converted into a theatre. I also like the grittiness of the Free Fringe’s venues down by the Cowgate. Back room of a pub? Venue. Basement arches that used to be a wine cellar? Venue! I think for me, the Fringe is all about taking unconventional spaces and turning them into a stage. 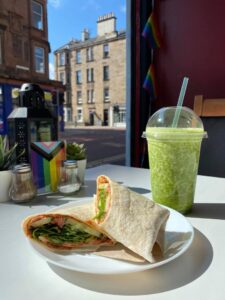 Where do you head to for both peace and quiet and to soak up the buzz?

Kafe Kweer is a really cute sober space for us LGBTQIA folk to hang out and have a gossip. Alternatively I can just grab it to go and take a wander down Union Canal. I quite like to look at the boats and pick which one would be mine if I could afford it! For the buzz (excuse the cliché), it has to be the Royal Mile. When I’m not stomping it myself it’s just an orchestra of street artists, pubs and hustle and bustle of punters (albeit much less than previous years).

What’s your ideal run-up to a performance and how do you wind down afterwards?

Two shots of vodka and a packet of crisps… kidding! Me and the team have a little dance party at the apartment to get hyped up, then we pick the “word of the show” as a foresight into what the theme of the night’s show is. So far we’ve had saucy, spicy, frisky… to name a few! Personally I do all the boring stuff. Warming up my voice, slapping on a face of makeup, staring in the mirror with existential dread… As for winding down, our ritual is going to the theatre bar round the corner for one. As we arrive they call last orders, so we never truly have much time to enjoy it! 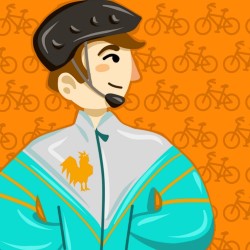 theSpaceUK show ‘On Your Bike’

Who is your hot ticket at this year’s Fringe? (apart from your own show, of course!)

On Your Bike is a new musical by the Cambridge Musical Theatre Society. I think it’s a well-kept secret but I’m well into musicals, and this one is smashing it! A very modern and uplifting show, I cannot recommend it enough. And I’m not biased because the team are absolute sweethearts. Promise. 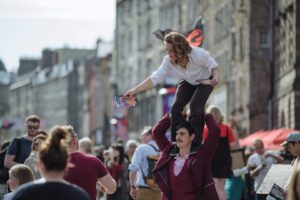 Tell us something we don’t know about being a Fringe performer?

The companies have around 5-10 minutes to “get in” the venue. So all set pieces and staging has been sweatily thrown on stage! It’s a surprisingly stressful process to start as I’m used to sitting backstage for hours on end, but now we do it like clockwork.

Best thing you’ve seen or overheard at this Fringe so far?

Yesterday I was getting lunch with a friend at a cafe adjacent to one of our posters. A group of people walked over to the poster and started copying the face I was pulling on the poster, completely unaware I was watching them. I hope they at least came to see the show!