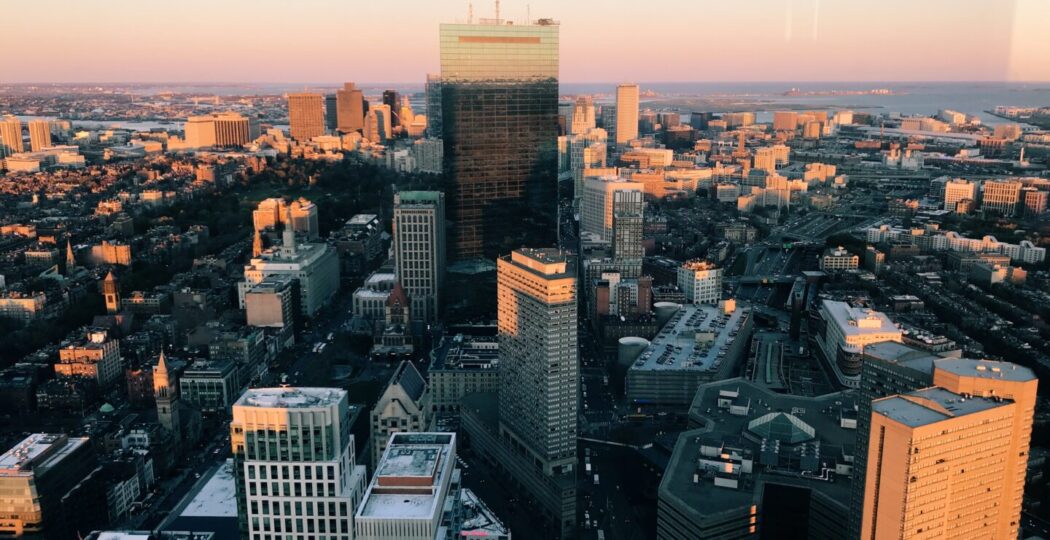 Chilled-out, historically handsome Boston still rivals any US city for its sophisticated food & drink scene and wealth of artsy highlights

Heralded as the birthplace of the American Revolution and full of heritage, Boston still feels like a pioneer of the East Coast. It’s a quietly proud metropolis, boasting some of the country’s finest galleries and museums. It’s also a water baby of a city with the rambling Charles River punctuating its heart; the wharves downtown lined with skyscraping hotels, boats cruising round the harbour islands and upmarket bars and eateries.

Boston shares a nickname with Scotland’s capital, crowned the ‘Athens of America’ for its legacy of scholars and authors. You won’t struggle to locate a good, independent book store in the city – there are plenty to be discovered whether you’re central or north of the river in student-filled Cambridge.

A hipster hideaway that’s worth the trip into the ‘burbs, get off the T at Davis Square station and take a wander down Elm Street, where you’ll find craft beer, cocktail dens and diverse cuisine – no pretension included. Try late-night bar Saloon for its dark paneling, sultry lights, potent bootleggers and 105 varieties of bourbon. Head to locals’ favourite Sligo for no-frills beer and a punt on the jukebox, and book a table at Martsa on Elm, a Tibetan restaurant offering tasty dumplings and traditional beef stew. 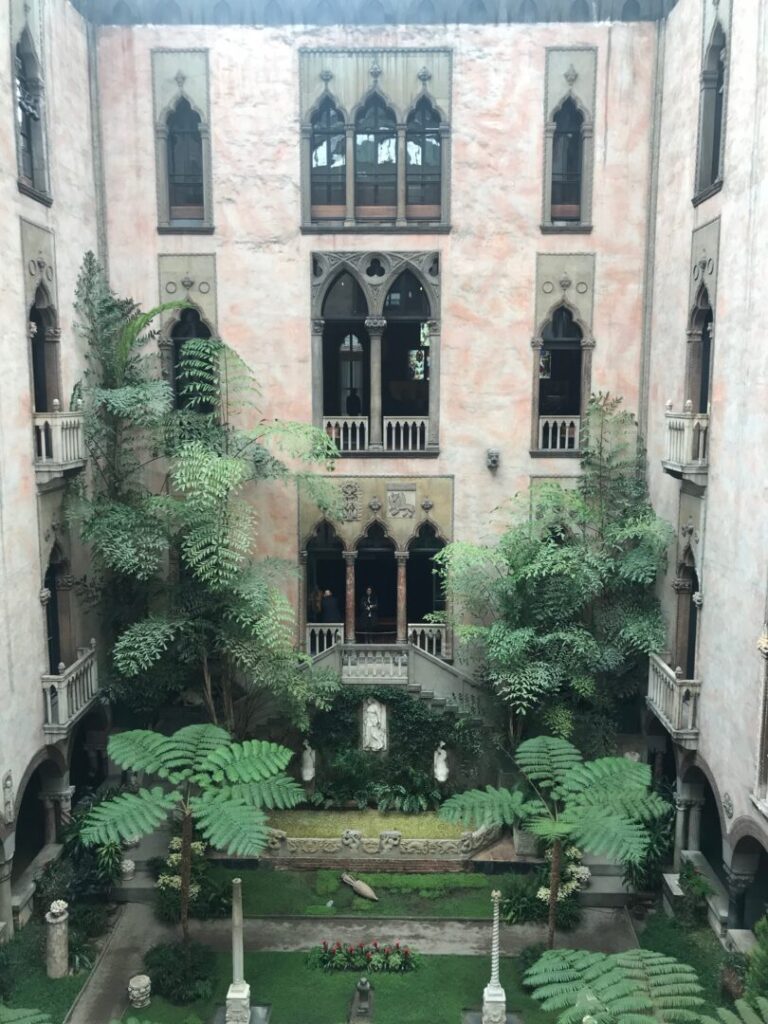 A must-visit, the once-home of art collector and society maverick, Isabella Stewart Gardner is a tranquil oasis in the Fenway-Kenmore neighbourhood, opened in 1903 in the style of a four-level Venetian Palazzo. The central courtyard is a picture of landscaped greenery with Roman and Medieval influences, while there are three floors of European, Asian and American paintings, sculptures and tapestries – including works by Rembrandt, Michelangelo and Botticelli – housed in the ornate rooms. Seek out Sargent’s dramatic El Jaleo in the Spanish cloister, although Gardner’s major coup at the time was acquiring Titian painting Rape of Europa for the collection.

Traditionally a baseball town, the crowd-rousing Red Sox have become emblematic of Boston. If you don’t manage to get tickets for some live action, head to Bleacher, a bar next to the stadium in a former batting cage, with a view out to centrefield. Game days inevitably get very crowded.

Once full of abandoned warehouses, Boston’s art and design district is now a thriving hubbub of creatives’ studios, boutiques and super cool contemporary galleries. The SoWa Open Market runs on a Sunday from May to October, showcasing local artisans and their wares. When you need some sustenance, head to Tremont Street for a real taste of the South End, whether it’s the famous oysters at B&G, Italian comfort food at Metropolis or the every-option-looks-delicious Parisian brunch at Aquitaine. 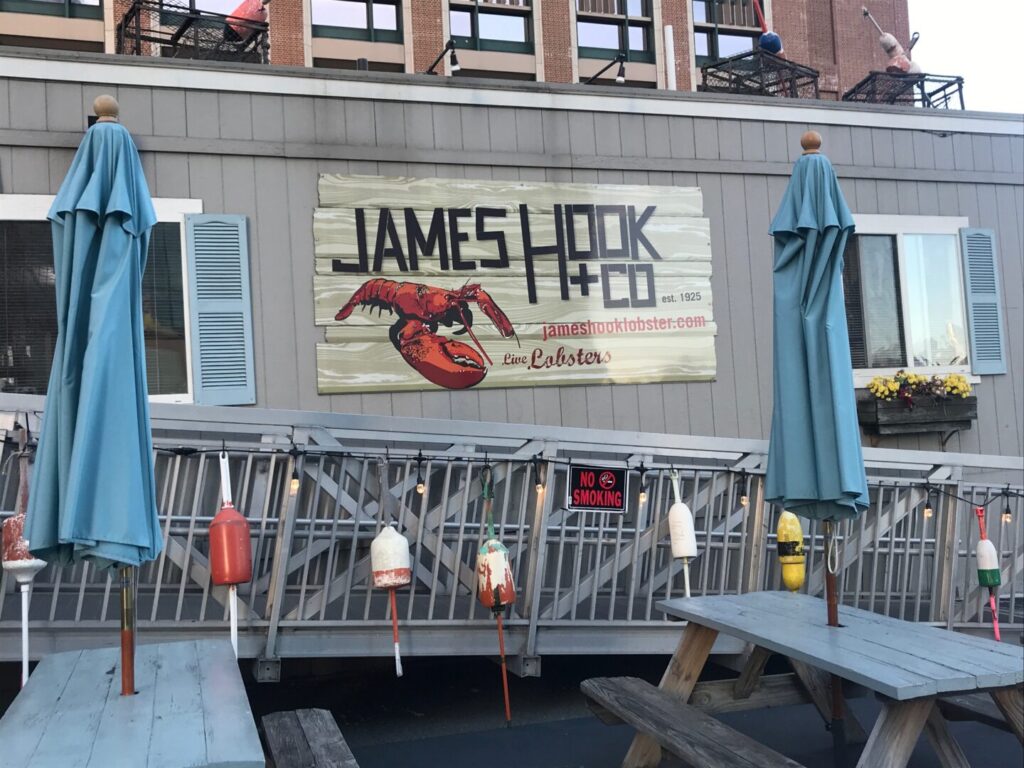 Have a breezy stroll down Harborwalk, look out over the water and get yourself some warming chowder or an award-winning lobster roll at family-run institution James Hook & Co. You’ll also find the glass-covered ICA jutting out to sea, along with huge, immersive artwork venue the Watershed – housed in an old copper factory. The venue will open for the 2021 season in July with artist Firelei Báez’s largest installation yet, reimagining the gallery space as the site of an ancient ruin.

The steep, cobbled streets, old-fashioned lamps and brownstone houses of well-to-do Beacon Hill are nothing short of a bonny browse. Look out for the purple-tinted, 19th century windows known as ‘Lavenders’, actually a defect in the panes’ glass when they were exposed to sunlight. If you fancy a tipple somewhere plush but unusual, clink your glasses to an evening cocktail at The Liberty, a towering, luxury hotel that was once the Charles Street Jail. 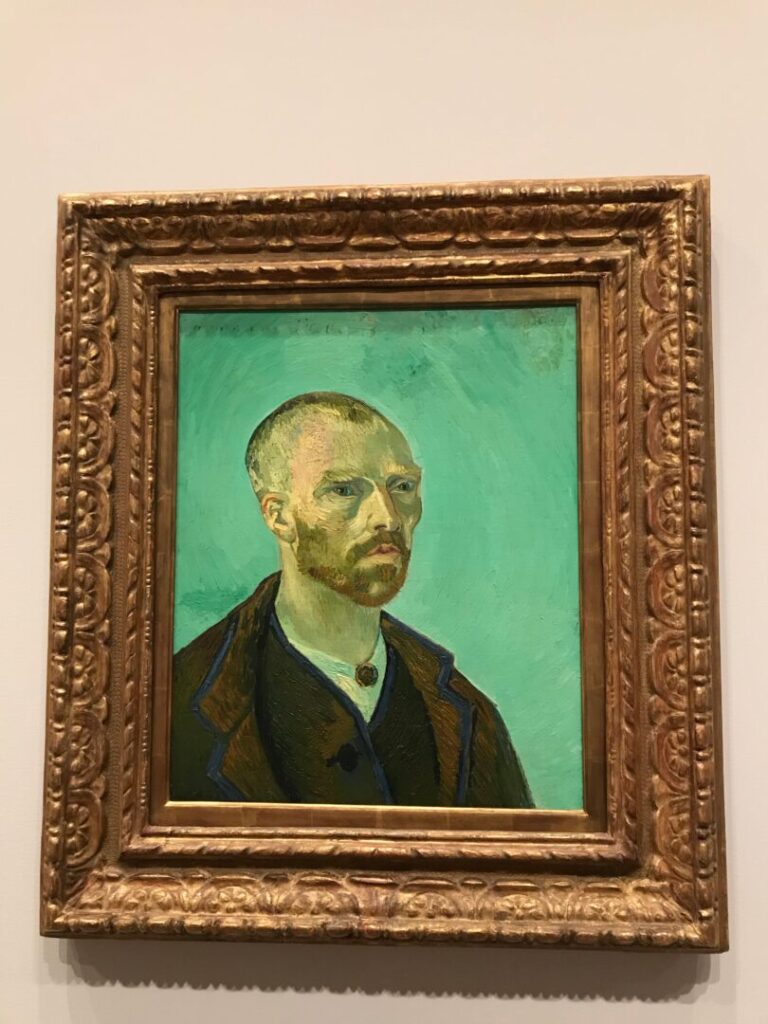 Whether you’re in the market for a good Irish pub – which Boston has in spades – or want to gawp at the hallowed halls of Harvard University, Cambridge is an attractive area to spend at least an afternoon getting to know. Once you’ve wandered the leafy university grounds, take time out to visit Harvard Art Museums, which has an illustrious roll call of artists on exhibit, including Van Gogh, Titian, Gauguin and Monet, to name but a few. A tip for a different perspective on the city is to walk to Mount Auburn Cemetery, a mix between a serenely-designed resting place and a public park. Follow the path to the Washington Tower, located at the gardens’ centre, and you’ll be rewarded with a sweeping panorama of the city.

If you’re keen for a jump-off base that’s close to both Cambridge and the city centre, the four-star Kimpton Marlowe (rates from around £160) overlooking the Charles River, is a trusty choice. The spacious rooms have a charming and comfy feel, with sink-into beds that are a welcome relief after a lengthy flight. Being welcomed with a few glasses of chilled, complimentary vino on arrival is a nice touch, and the trendy Bambara Kitchen + Bar also serves hearty breakfasts to get you set for a day’s sightseeing. 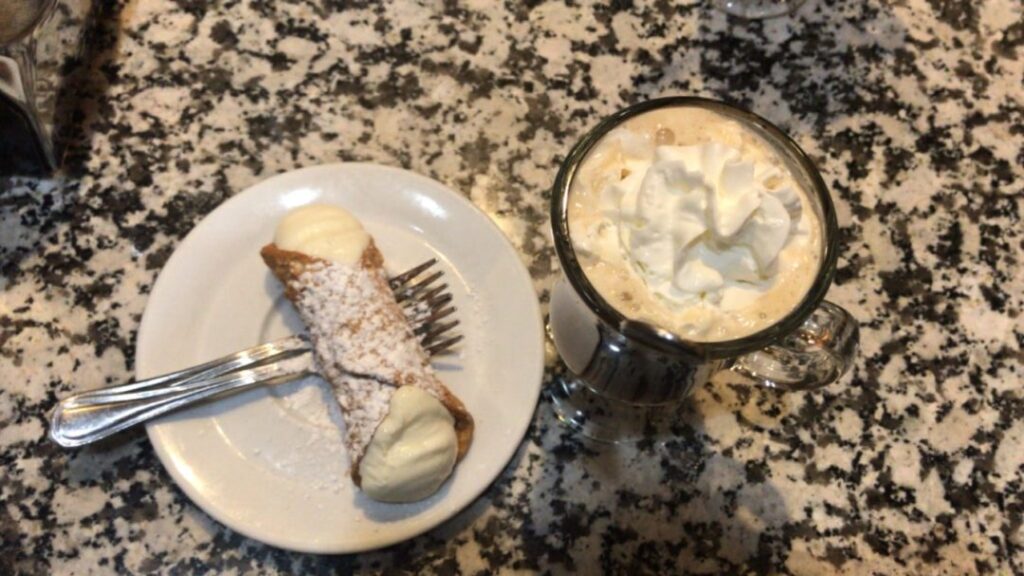 Boston’s brilliantly atmospheric Little Italy is an essential stop-off. Part of the Freedom Trail charting significant buildings in the American Revolution story, including the landmark Old North Church, the area is also a dining delight. If the weather treats you well, devour the homemade pasta on the rooftop deck of Fiore, and make sure you stop off at legendary Caffe Paradiso for coffee and cannoli.

Indulging in some retail therapy on one of Boston’s most renowned shopping thoroughfares is an eight-block odyssey traversing high-end, independents and vintage. Come with a fat wallet and browse the luxury collections at fashion houses like Chanel and Ralph Lauren or peruse some playful prints and embellishment at the Alice + Olivia boutique. For rock ‘n’ roll denim, leather and cowboy boots, Rick Walker’s is your place, and make sure to nip into literary establishment, Trident Booksellers. 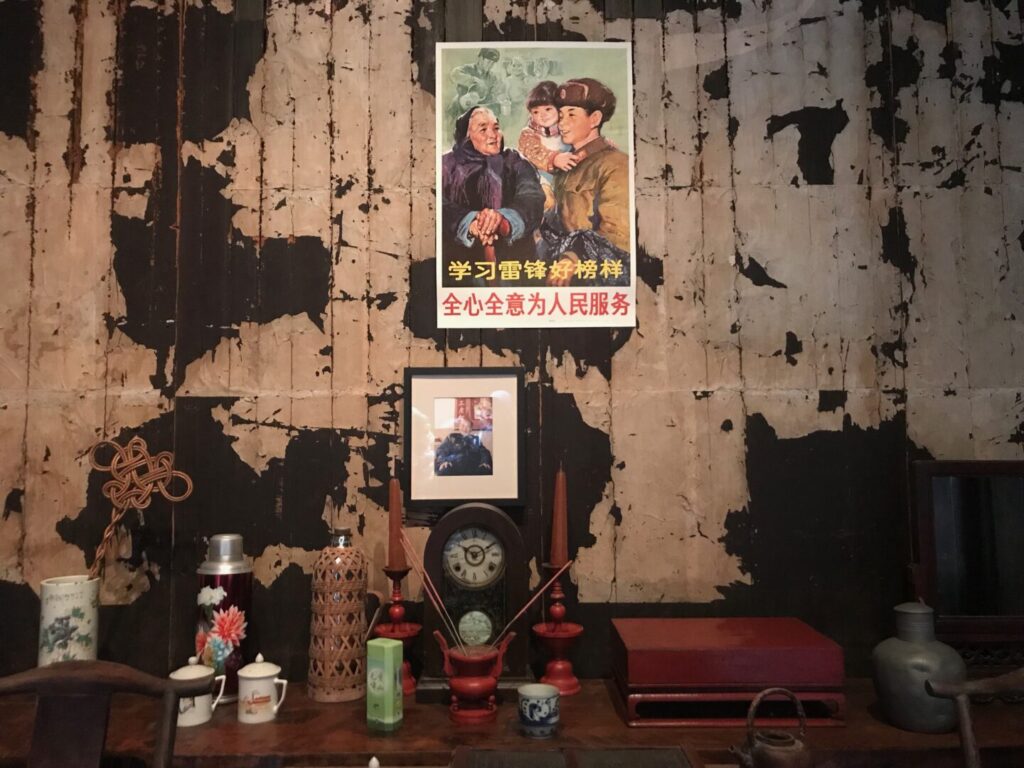 A Qing Dynasty House, part of the permanent collection at Peabody Essex Museum

Infamous for its frankly brutal Witch Trials and effusive Halloween celebrations, the coastal city of Salem is well worth the 30-minute train journey from Boston’s North Station. If you want to delve further into the witchcraft hysteria of 1691, visit the Salem Witch Museum, but you’d be missing a trick not to spend time in the superb Peabody Essex Museum. Past exhibitions span both the quirky and high-profile, with a high point of the permanent collection being a Qing Dynasty Chinese house which was brought to the US and rebuilt piece by piece.

If you’re a tea Jenny, pass by Jolie Tea Company which has over 200 loose leaf options, which go just splendidly with a macaron. House of the Seven Gables (the very same that inspired the Gothic novel) is just a hop away. The views out to sea from the garden are lovely, and adventuring round the colonial mansion and hearing its backstory, secret doors and all, is great fun. 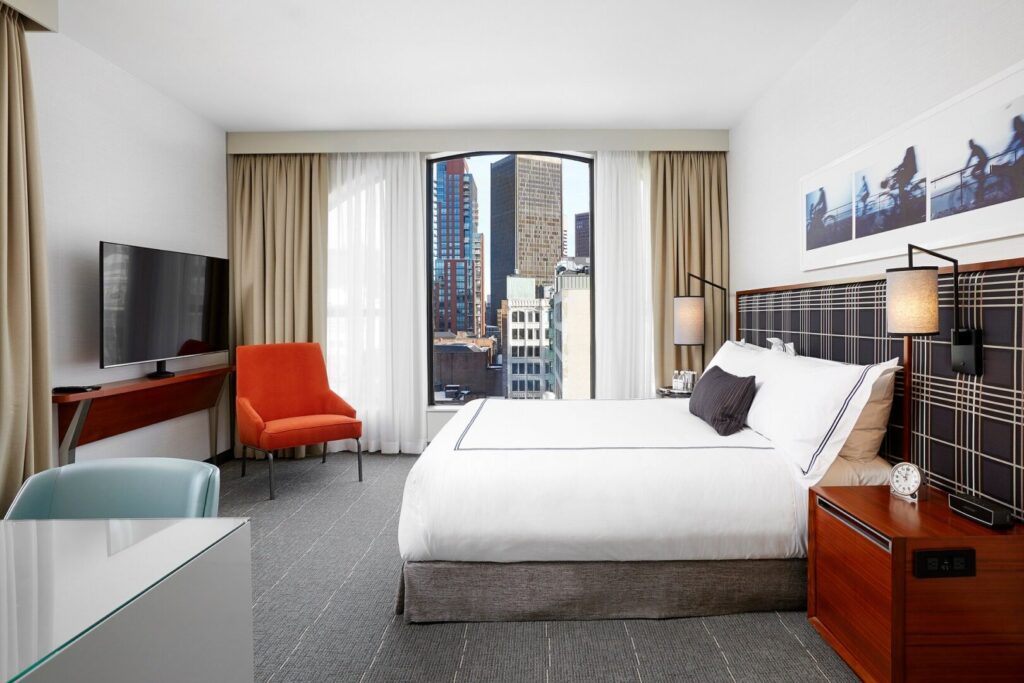 Situated downtown, with the red sign for the art deco Paramount theatre twinkling along the street, The Godfrey (rates from around £227) is at the centre of Boston city action. You’re walking distance from bustling Chinatown, the Theatre District and Boston Common, an enjoyable saunter spread over 44 acres, and America’s oldest public park.

Arriving on Boston’s hotel scene in 2015, The Godfrey impresses as soon as you walk into reception. Think subtle, silvery sleek with some idiosyncratic design accents, but what’s really striking is the appealing mix of vintage and contemporary. The heritage of the two century-old buildings has been retained and restored, with the Neoclassical and Gothic Revival elements shown off in the marble staircase and elevator lobby leading up to the 242 rooms.

The guestrooms have a relaxed but discernably luxe feel, with statement checks atop the beds and an eye-popping vista across the streets and high-rises of Downtown Crossing. The style touches are carefully appointed: from fine Italian linen to a BOSE sound system and classy Heely of London bath products in the equally polished bathrooms.

Back on the ground floor, George Howell Coffee is where you need to head for a top-notch espresso hit with accompanying pastries. If you’re on board for cocktail hour, you can also sip on a drink at the hotel’s small but perfectly formed craft bar and lounge. 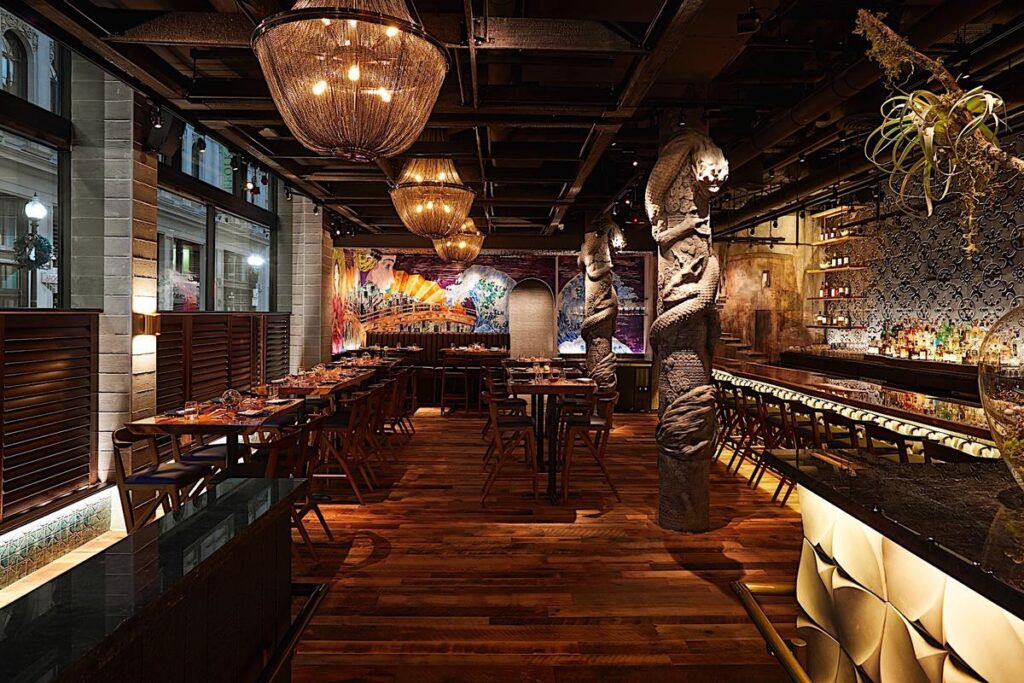 Slip next door to RUKA Restobar, and you can continue the cocktail sampling. Citrusy Pisco Sours flirt on the menu with brandy-tinged Creole Waltzes and other concoctions, in a restaurant named after a Peruvian term of endearment. The interior is gorgeous: seductively lit and colourful with bright, suspended ceiling rope, dragons peering round columns, a mural based on Peruvian street art and a golden sculpture of Inti, the Incan sun god, regaling the bar.

The food is based around Nikkei cuisine, a mix of Peruvian and Japanese ingredients and techniques. The best approach is to share dishes from the four menu sections to get the full gusto of the flavours. Food combinations are daring, but they work to scrumptious effect. Highlights include spicy tuna makimono rolls teamed with Asian pear and spiced jicama, melt-in-the-mouth chicken steamed buns, a ceviche using some of the local lobster catch with smokey-sweet aji panca, and a spicy pepper and broccoli curry.

For key information on exploring the different regions of Massachusetts, go to visitma.com 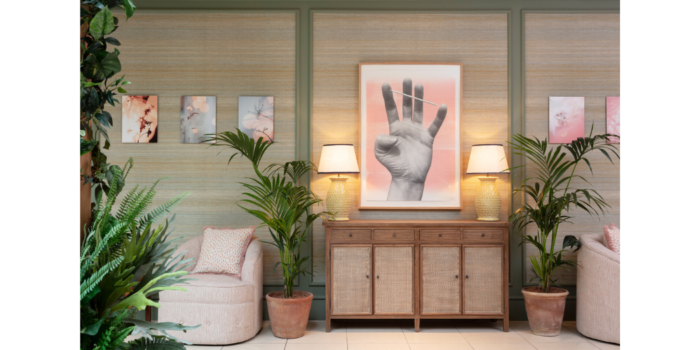 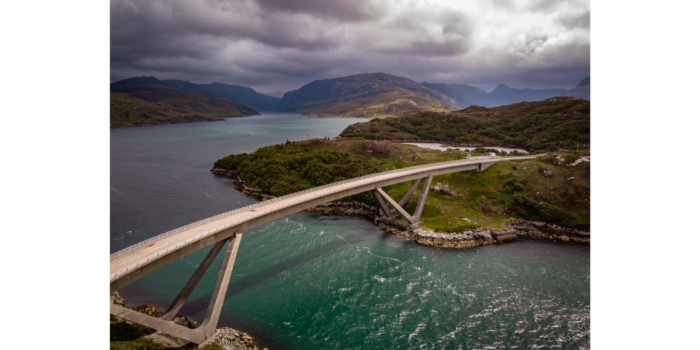 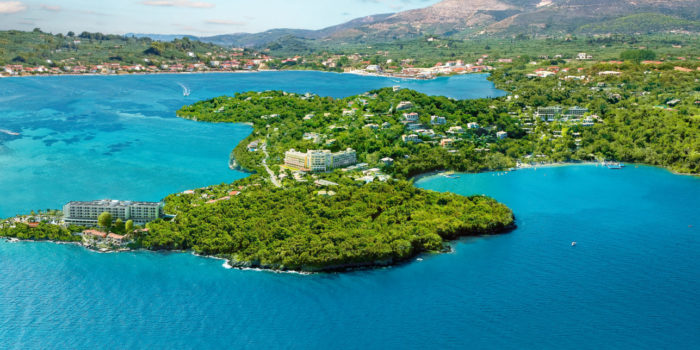