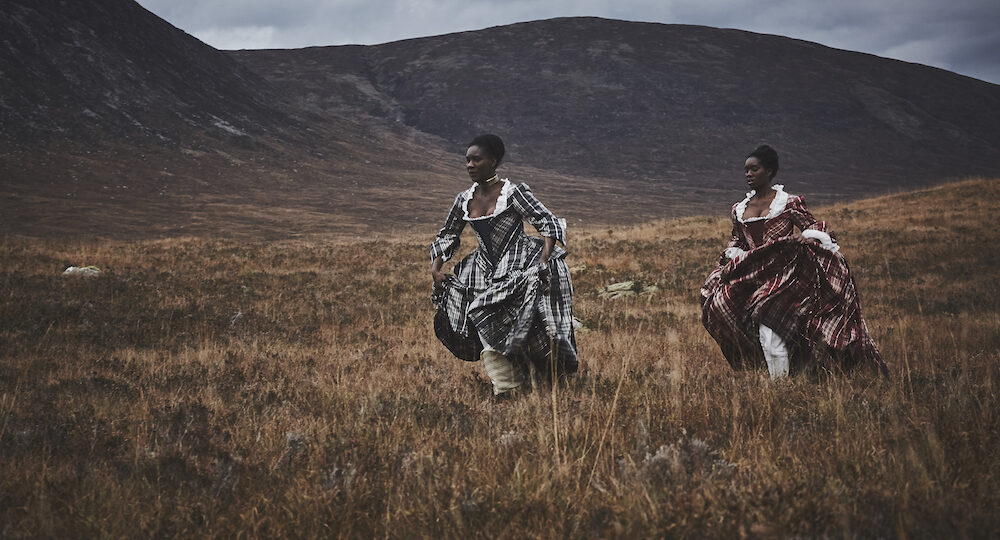 Slavery was a reality for hundreds of African people in 18th century Scotland – a shameful and neglected truth now increasingly being confronted, and under the spotlight in a short film set to become a full-length feature, starring Scottish sisters Morayo and Moyo Akandé

It’s a harrowing tale of escape, adversity and ultimately, a battle to survive.

1745 premiered at 2017’s Edinburgh International Film Festival (EIFF), a short film telling the story of two African sisters sold into slavery, who make a bid for freedom by running into the depths of the wild Scottish Highlands. Their master (played by Game of Thrones and Outlander actor Clive Russell) is in close pursuit. A fictional story inspired by true-life accounts of runaway slaves in Scotland, it’s an exercise in endurance and mental resilience, and a reminder of Scotland’s role in the transatlantic slave trade.

The award-winning short, which screened at film festivals worldwide and is currently being developed into a full-length feature film, was a first-time collaboration for sisters Morayo and Moyo. Both actors, they were born in London and brought up in Glasgow. Morayo began writing the historical drama after it was commissioned by the Scottish Film Talent Network for their New Talent Shorts programme. The film’s striking locations include Gosford House in East Lothian and the vast and suitably rugged landscapes found in Ben Nevis, Glen Coe and Glen Etive in Lochaber.

1745’s story was inspired by advertisements you found in old Scottish newspapers of slave owners searching for runaway slaves. Did you discover them by accident or did you intend to write about slavery?

Morayo: I didn’t have this story in mind, but I knew I wanted to do something period. I started thinking: were there any black people in Scotland in the 18th century? What would it have been like living here? I started researching, then I came across this image of a slave who had run away in Stirling. After that, I found advertisements for runaway slaves at the back of some old Glasgow and Edinburgh newspapers. I also found some historians at Glasgow University who were working on a project called ‘Runaway Slaves in Britain’, collecting all these runaway slave advertisements – they’d found hundreds. I was like: how does this all exist and I don’t know about it?

Moyo: When Morayo showed me what she’d discovered, I was shocked to learn there were so many slaves working and living in Scotland in the households of slave merchants. I thought to myself: this is something I was never taught at school. It wasn’t in the curriculum. So I jumped on board to help develop the script with her.

Do you know how many slaves were thought to be in Scotland at the time?

Morayo: It’s estimated there could have been as many as 200. It’s only the slaves that run away that are accounted for, and then there are a couple of accounts of court cases, like the Joseph Knight case in 1774, where he brought a freedom suit against his Scottish master [ownership of personal slaves in Scotland was eventually banned in 1778]. Other than that, if it’s not recorded, we won’t be aware someone actually existed as a slave, because they had no voice, and the accounts are usually through the eyes of the merchant or slave master. The lack of records have made it a ‘forgotten’ part of Scotland’s history. 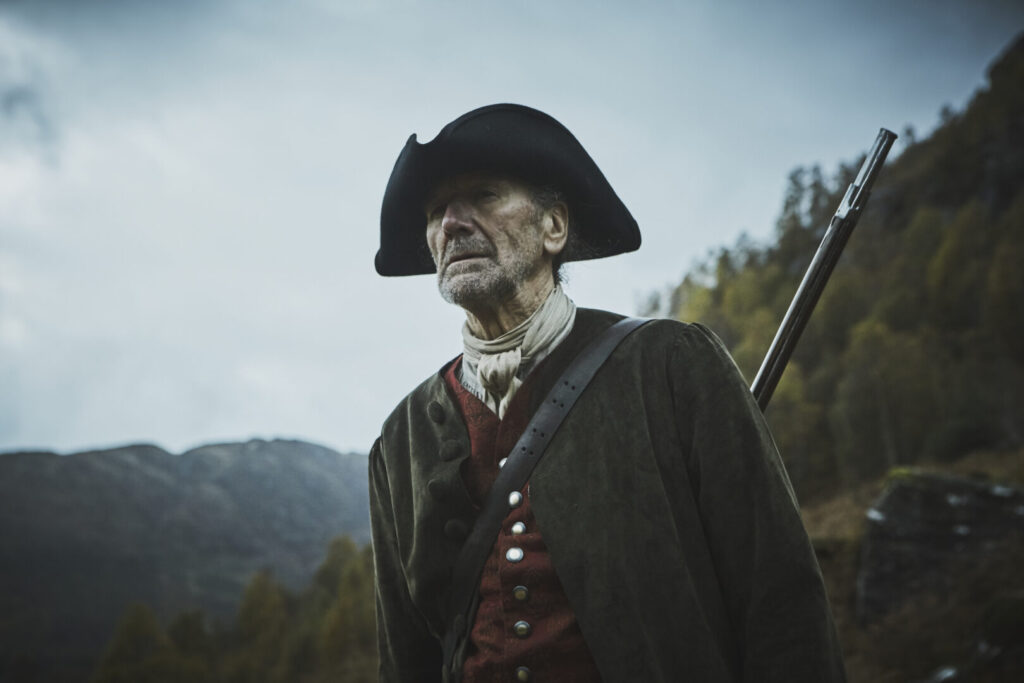 How do people react when you fill them in on the film’s background?

Morayo: Mostly with disbelief and shock. A lot of people aren’t aware of the legacy of the slave trade in the streets around them in Glasgow – Buchanan Street, Ingram Street… They’re all named after merchants who made their money from slave-grown tobacco. Glasgow’s Museum of Modern Art [originally constructed as a home for ‘tobacco lord’ William Cunninghame] was also built on money made from the slave trade.

Moyo: Scotland is the last place people associate with slavery within the UK. As Scots, we talk about all the injustice and suffering we faced during the 18th century – the Battle of Culloden, the Jacobite rising… When you reveal a different side to Scotland’s history, where other people were fighting for their freedom too, people get a bit uncomfortable with it, because that’s us as Scots – we did inhumane things to other human beings and it’s an uncomfortable topic. I think that’s another reason why it’s not been put out there and made accessible for the public to find.

Why did you feel it was so important to tell this particular story?

Morayo: I wanted people to know that black people did live in Scotland, and that they were imprisoned and fighting for their freedom ­– and that it goes back as far as the 17th century. If you’re not aware of something, how can you acknowledge it? We’re black Scottish women and this is our home ­– how could we not have known? There’s the historical side, but also the relationship side – the study of human beings and survival. I really wanted to make a story that was empowering for people of colour. I felt that through the sisters’ relationship and their struggle we would become empowered through this journey that they go on.

Moyo: I think a lot of people can connect with that journey. It’s tackling the human condition and the complexities of this relationship out there in the wilderness while trying to survive.

Did being sisters help when it came to tackling the more emotional scenes in the film?

Moyo: It was scary at points. There are a few moments in the film that are very climactic and emotionally draining and there were times where I thought: I can’t do this, because it’s my sister that’s going through this. You’re up there on location, staying on set together for the whole week. You’ve got the costume on, you’re in the middle of the wet, cold Highlands and you’re trying to portray these people in a truthful way. You really immerse yourself, and acting and reality can became quite blurred.

Morayo: We only experienced a tiny bit of what it might have been like for slaves trying to escape at the time, and we got to go to our warm caravan on location at the end of the night where we get food. How on earth would they have survived one night out there? It really put you in the frame of mind of the hardships slaves had to endure for being a different part of society. 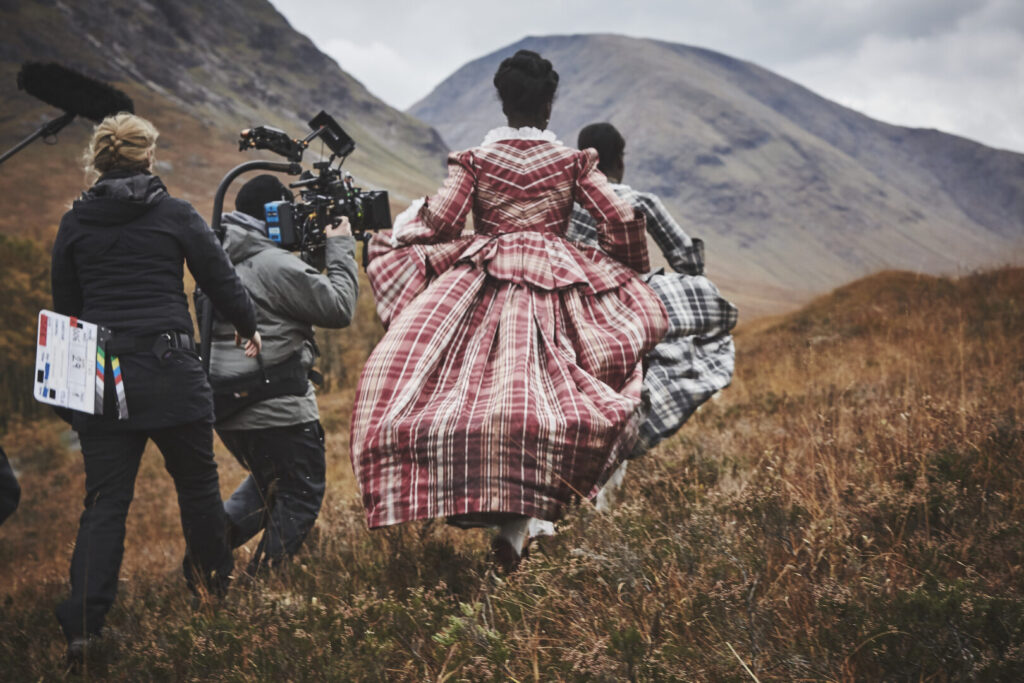 On location in the Highlands. Credit: Jonathan Birch

Were there any challenges to filming the picture?

Moyo: Because there’s so much history and so many themes to be explored – conflicts between the sisters, lust, betrayal, greed – to try and include all that into a short film and also do it justice was a little bit challenging, but I think we succeeded.

Morayo: It makes you want to do more on this topic as there’s so much more to the story. It’s inspired me to continue on and answer the question – what happened to them next?

Has making the film made you look into your own family history?

Morayo: I never really liked history at school, but it’s definitely made me hugely interested in searching for more stories, and finding out if there were any slaves that escaped successfully. Our family are from Nigeria, and there were people that were taken from Nigeria to be slaves in Scotland, the US and the West Indies. So it’s made us question: how did our ancestors escape that? It’s made us want to look deeper into that part of our history.

Moyo: As well as the past, working on the film has really made think about modern slavery too. It’s something that’s happening in plain sight around us, but this time it isn’t defined by colour.

The costumes for the film look really striking.

Morayo: When you think of slaves in America, you have a really different perception in your mind of how they looked. In Scotland, wealthy owners would dress their slaves in elaborate clothing, almost like they were an accessory – like a handbag or designer dog. They did it to show off their wealth and power. In the runaway ads, they had really detailed descriptions of what their slaves were wearing. They really valued them, but it was so messed up because they were imprisoned as property. Ali Mitchell, the costume designer for the film, was amazing – she made the outfits by hand. She wanted them to be as authentic as they could be for the story.

What was the most shocking thing you discovered while working on the project?

Moyo: There was an advertisement for a runaway slave called Anne, which described her as wearing a collar. From afar, it might just have looked like a piece of jewellery, but it was a collar engraved with her master’s name in case she ever tried to escape. We made a version of the collar for the film, and when I put it on for the first time… urgh. That was disturbing. It really put it all into perspective for me.