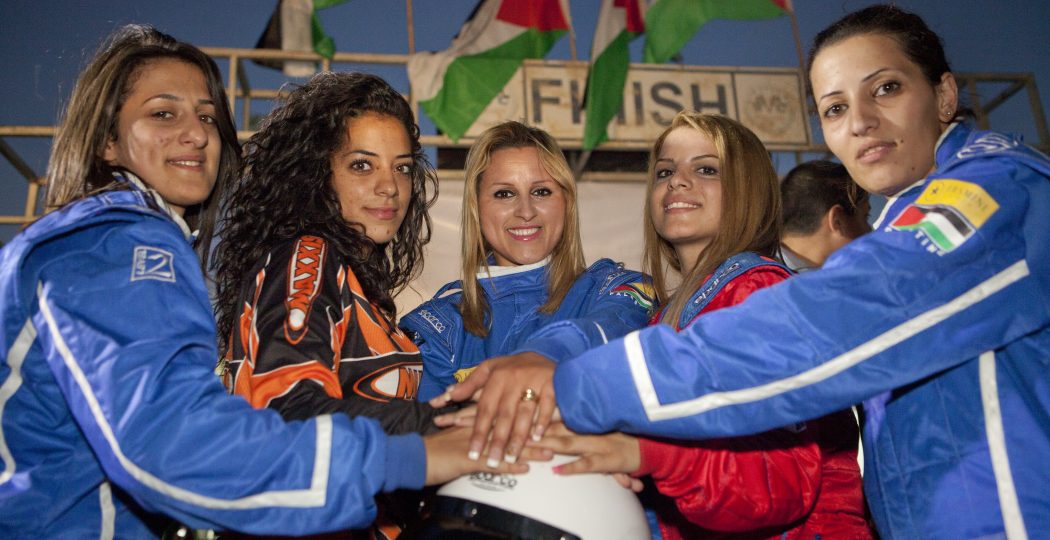 The race action begins slowly at first, with a group of men pushing a car up a hill and a woman up front peering back out of the window. It’s clear who’s in the driving seat throughout Speed Sisters, a high-octane documentary shining the spotlight on the women who make up the first all-female race car team in the Middle East.

As the racing scenes kick off, Speed Sisters accelerates into an exhilarating ride, capturing the lives of five women with a need for speed and a determination to compete. Director Amber Fares lived in the West Bank for two years before shooting the film, and wanted to look at the story of Palestine from a different angle – focusing on street car racing as one of the community’s most anticipated social gatherings as well as its pioneering female drivers.

The Speed Sisters joined forces when Palestinian Motor Sport and Motorcycle Federation founder Khaled Qaddoura called for more female racers to start competing. Marah, Betty, Noor, Mona and Maysoon all met at the track and formed the team which went onto challenge the norms of the male-dominated sport. The federation organises autocross car races every six weeks, with every driver given two attempts per race to clock in their fastest time.

Drivers practice and compete wherever they can find the space – vegetable markets, an old helicopter pad and a security academy all become makeshift tracks on race day. Crowds pile in at the sidelines, cheering and giving the female racers as much encouragement as the men. With highly contested speed tests and races being hosted in the cities of Ramallah, Jenin, Nablus, Bethlehem, Hebron and Jericho, drivers compete not just to win for themselves but also for their hometown. Reigning 19-year-old champion Marah is seen racing neck-and-neck with the glamorous and talented Betty – her teammate and closest speed rival. Marah decided racing was her calling after stealing her parents’ car at 11 years old. “I knew she was unique,” comes the proud statement from her dad Khaled, a hard-working dental technician living in the impoverished northern region in Jenin, who has championed his daughter’s passion from the get-go. Marah leads the camera to a table stacked with trophies, her favourite being the golden award painstakingly crafted by her father to honour her achievements. Fellow team member and natural athlete Noor hurtles round the track but sometimes loses her bearings, while Mona, one of the first women to race in Palestine, is in it for the heady release rather than the pursuit of victory.

The stark reality of living through an occupation becomes clear when team captain Maysoon passes through the chaos of one of the West Bank’s many Israeli checkpoints. “The smell of tear gas reminds me of my childhood,” she says. The dangers faced by the women as they battle to continue training also present themselves in shocking detail when Betty is shot in the back with a tear gas canister fired by a soldier, near one of their regular training grounds. She is shaken, but recovers and gets back behind the wheel. In one particularly affecting scene, Marah sprints fully clothed into the crashing waves at Jaffa, having finally received the permit she needs to reach the seaside city. “Imagine if we could come here every day,” she shouts. Freedom suddenly seems like a very precious privilege.

A powerful story about overcoming both physical and cultural barriers, Speed Sisters is a fast-paced insight into a team’s spirited resolve to live life to the full on and off the track, despite occupation. The support afforded the girls by the men and women in their life is obvious, but it’s also a film about good old-fashioned competition. As team captain Maysoon recently said, it’s about staying strong in the face of resistance. “We want to be role models for any girl that has a dream, and show that they can fight to achieve it.”

Go to www.speedsisters.tv to find out more.