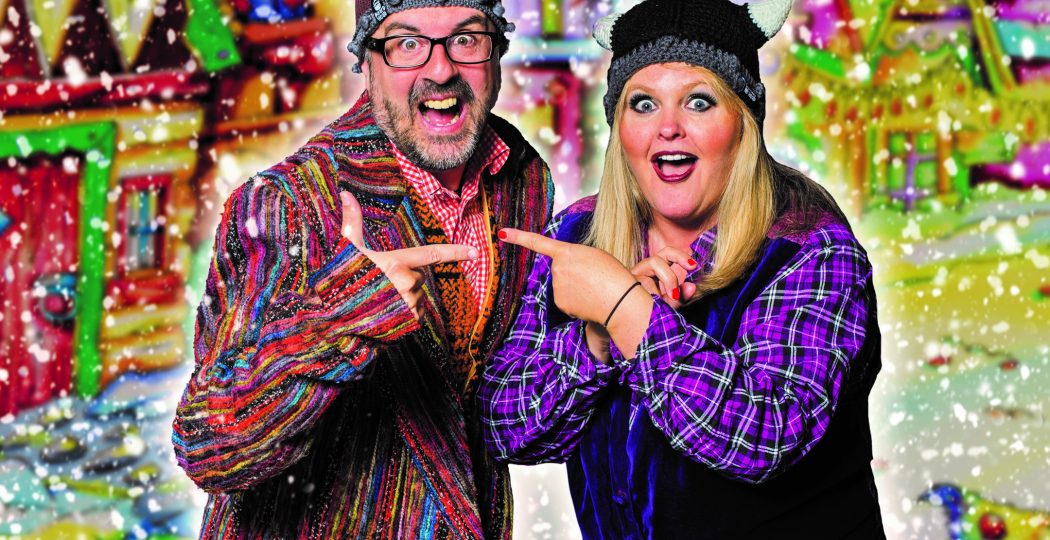 1)The Buzz – There is no better feeling than the excitement of a theatre during Panto. The energy from the kids in the audience is palpable and I often find myself thinking I’m very fortunate to be a part of something that makes so many people of any age so happy.

2)Tradition – The Pavilion Theatre in Glasgow has such a rich history within the annals of Scottish Variety and musichall it is a privilege to be involved . There is a sense of past, present and future within it’s beautiful walls. I remember being about five and being invited backstage and into the dressing room of theatrical legends Jack Milroy and Mary Lee. Mary put my hair in bunches and showed me her make up and sparkly fairy costumes. I remember thinking it was the most magical place on earth.

3) The Camaraderie – I’m lucky that in the eight Pantos I’ve been part of I’ve always had a great cast. Its important to get on as you spend all day everyday together for the best part of three months. Panto becomes a bubble and your cast members become your new family and friends. This year I’m next to Ewen Cameron, Stephen Purdon (Shellsuit Bob) from River City, Grado the Wrestler, Craig Glover our dazzling dame, Nicola Park from Rab C, Claudia Russell who plays our turkey and the fabulous Liam Dolan. We are having a right laugh and I’ll really miss them when it finishes.

4)The Children- We have five groups of dancing kids from Robert Hamilton’s dance school and they are a hoot and keep me on my toes. It’s fun to be part of this experience for them. I also love watching the faces of children in the audience when magical things happen. They really believe. For many people Panto is their first theatrical experience. I like being part of that too.

5) Weight Loss – Every year I lose about a stone and a half doing panto. This is due to the amount of physical running about that is involved in performing two shows a day. I’ve worn my Fitbit in my bra this year just to see how much I do and each day I am clocking up between 40,000-50,000 steps, that is ten times the daily average.

6)The Audience- This is my eight panto in the Pavilion and I really think our audience are the best. They love to get involved, it is raw, inclusive and always lively. I like how families return year after year as it is their tradition. There is one lovely man George Mulveny who comes with his entire family every year. He will be 102 this year and I’m hoping to see him on his birthday in row A of the stalls as usual. On his 100th birthday I asked him if he wanted a photo with the cast which included many famous TV names. He replied :’ No but can I get my picture with the lovely dancers.’ Brilliant!

7)The Costumes- There are over 250 costumes in our panto most of which are brand new and made to measure. They are quite spectacular. This year I am a baddie called Smart Cat and have six changes, the Dame has eleven. I think this is where most of my weight comes off, changing full costumes in thirty seconds is an art form if a little stressful.

8) Interaction – Panto would not be panto without the audience joining in. When I was a fairy I loved everyone helping with my spells, now I am a baddie the more boos I get is a testament to my success in the role. At first I thought I’d hate being the baddie but it’s actually very good fun. I must have a dark side after all.

9)The Staff- The front of house staff, admin staff, cleaners and backstage crew are every bit as important as the cast in making the show tick in any theatre. It’s a long hard slog with eighty shows to get through but we do it. The end of run panto wrap party is always legendary as everybody gets to finally let their hair down and go a bit mental. I make sure I have NOTHING in the diary for the following day.

10)Christmas Eve – Without doubt the best show of any Pantomime anywhere are the two performances on Christmas Eve. Everybody is hyper including the cast. The energy in the theatre is incredible and we all have butterflies because we know Santa is coming! We do a secret santa before the evening show and sing Jingles Bells. I get goosebumps at the finale on Christmas Eve as it just feels so truly special.

Cat Harvey is a Sunday Mail Columnist and Award Winning Radio Presenter, catch her every Sunday morning 9am-12 on Clyde1, Forth 1, West FM, Tay FM, Northsound 1, MFR and Radio Borders.

She has starred in over 600 performances at the Pavilion Theatre previously playing Tinkercat in Peter Pan twice, the Fairy Godmother in Cinderalla, The Blue Fairy in Pinocchio, Glinda the good witch in the Wizard of Never Woz, a Naughty pirate in Treasure Island, Friar Tuck in Robin Hood and now Smart Cat in Elfie’s Magical Adventures.